All coffee plants are separated into categories of genus and species. The Genus of all coffee is Coffea. There are several species of coffee, however Coffea Arabica is the genus and species of what the vast majority of specialty coffee is composed of. Coffea Arabica is also known as ‘Arabica Coffee’. There are hundreds of known and classified varieties of arabica coffee, as well as thousands that have not been identified as of yet..

Choosing which variety to grow has a lot of parameters for the grower themselves: disease resistance, yield of one plant, rainfall, fertilisation needed, etc. But when roasting, you may not even know that information or how a variety might play into your buying or roasting decision. Here, we aim to help inform you, to demystify the word ‘variety’ for you and how it relates to coffee.

First, an introduction to why variety might be important.

All coffee plants are descended from the first wild coffee plants that were used as medicine and food prior to the 1300’s. Cultivation of the wild plants began in Ethiopia around the 1300’s and plant genealogists pinpoint this period of time as when genetic divergence in Coffea began.

The first ‘different’ plants and their direct descendants are called ‘Typica Heirloom’. It is thought that these coffee plants were first cultivated as a crop in Yemen and were then taken to Bourbon Island (now called Réunion Island) in the 1300’s by French colonists. Coffee descended from the coffee from Bourbon Island are ‘Bourbon’ varieties.

The plants that were cultivated from Typica heirloom variety, that did not make the pitstop at Bourbon Island, are known under the branch of ‘Typica’ varieties.

Bourbon and Typica Varieties have mutated and been bred with other coffee plants over the past 700 years to create hundreds of unique varieties of arabica coffee grown all over the world. Yes, that’s a lot of unique varieties of arabica coffee, but according to a study by World Coffee Research, ‘The results of our genetic diversity study indicate that arabica have very little diversity—much less than was expected. This makes the species especially vulnerable to disease, climate change, and other threats. The most commonly grown coffee varieties are even more genetically narrow than the research collection.’

If we were to draw a family tree of Arabica coffee it would look a little something like this: 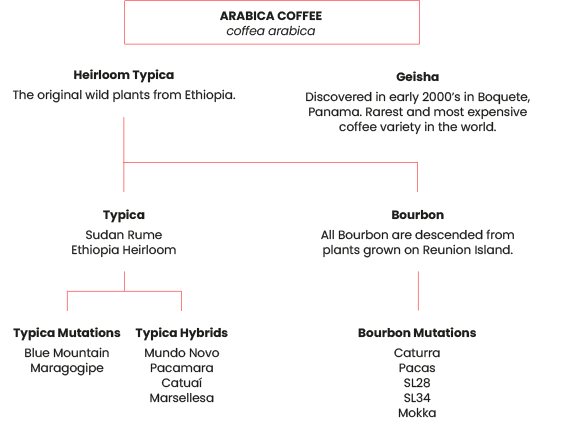 Each variety has its own expected amount that one plant can produce, unique bean size and density. Some varieties have unique flavour characteristics that you can expect no matter where they are grown, whereas other variety’s flavours may depend on the growing conditions of the plants. Each crop year is different and as coffee is an agricultural product, we cannot expect the same results from the same farm every year. There are ebbs and flows in rainfall, sunlight, and temperature, which will all affect the individual coffee plant’s outcome.

These varieties are most similar to the Geisha variety, in shape (thin and pointed), size and flavour characteristics. Typica tends to be very fragrant, complex, floral and sweet. Typica Plants are amongst the lowest yielding plants, susceptible to disease and generally have a higher cost due to the scarce amount that one tree can produce.

Mutations happen naturally in coffee. The mutations occur when a specific plant has been impacted by rainfall, sunlight and other factors in growing. The impact is so great that when an affected plant’s seed is taken to create a new plant, the new plant has physical characteristics that differ from the parent plant.

The most common Typica mutations that you may have come across are Blue Mountain and Maragogipe.

Yellow Catuaí, a Typica Hybrid of Caturra, a bourbon mutation and mundo novo in Brazil.

Typica Hybrids are the most common type of coffee varieties that you may have seen on a package of coffee. The hybrids are the product of breeding two different types of plants, typically a Bourbon mutation and a Typica mutation, together to solve a problem that a grower might face. These plants are bred to increase the amount of coffee that one plant can produce, become more disease and weather resistant, grow lower to the ground, etc.

The Typica hybrids that you may have had experience in tasting are Mundo Novo, Pacamara, Catuaí, and Marsellesa.

Bourbon produces roughly 30% more coffee cherries than Typica plants do. They tend to have more of the chocolate, caramel sweetness than bright sweet and sour flavours of the Typica variety. Bourbon plants tend to be shorter and rounder, as well as more hardy than Typica plants, making them excellent to make hybrids with Typica plants. 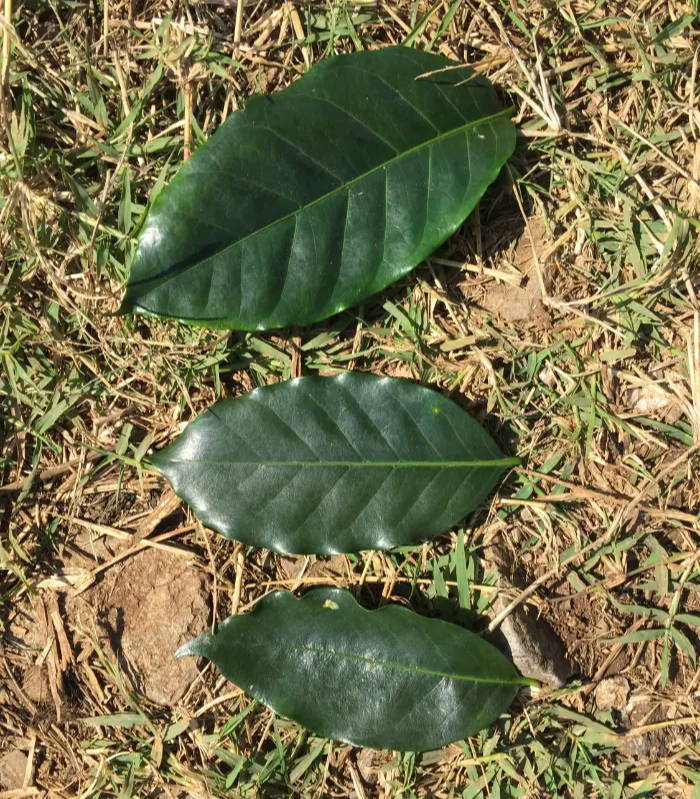 As previously stated, mutations happen naturally to all coffee plants. The most common mutations lend themselves to being the backbone of the specialty coffee industry.

We could not end this without speaking about the most elusive variety of the bunch: Geisha.

Geisha, as far as any researcher or coffee scientist has proven, has a very close genealogy to Ethiopian Typica heirloom varieties. It is a rare variety that was ‘rediscovered’ in Panama by the Peterson Family in Boquete in the early 2000’s. The Peterson’s had separated a few areas of their farms into lots and kept those coffee cherries separate from others. They submitted the separated lots to the 2004 Best of Panama coffee competition. One of the specially separated coffees won the competition and went on to be sold for $350 per pound that year, a record breaking total. Since 2004, the Geisha variety has been propagated throughout the Boquete region and has been grown in Colombia and Costa Rica, with some success, though the highest price for Geisha is usually from Boquete; in 2019, one pound of unroasted Panama Geisha was sold at auction for $1029.

Geisha and its storied past deserves its own blog post, but we would be negligent to not mention Geisha here. When tasting a Geisha you can expect lots of complexity. The taste is almost unlike coffee as you may know it: intensely floral, juicy, with tropical and citrus flavours, overwhelming sweetness, and a thin tea-like mouthfeel. Roasting this coffee is a rare occasion: most commercial specialty coffee roasters never have the experience themselves. Roasting Geisha requires a light roast to amplify the bright and intense flavours, naturally occurring in the coffee.

The World Atlas of Coffee by James Hoffman